A Biography of the Late

Founder: Church of the Lord Jesus Christ of the Apostolic Faith, Inc. 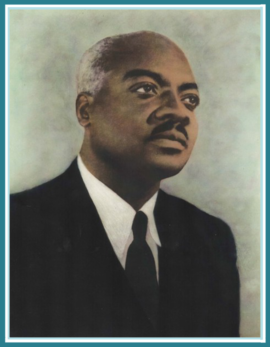 "Up from the Land of Degradation, My Lord's Leading Us Home" On that eventful day of November 24, in the little town of Pine Tree Quarters, Edgecomb County, North Carolina; the birth of the infant son to Mr. And Mrs. Johnson, marked the turn of the world's Religious History. The man that would change the landscape of the world’s religion had just been born. The lovely night was calm and serene. The stars spangled the skies with a florescent brightness as the world, the whole horizon seemed to shine with luster of mid-day around the tiny cottage amidst the pines.

Inside the house, everyone hustled about; and preparations were made for the birth of one who was to become a world figure, one who was to bring to the world a new or seemingly new concept of God's eternal word; one so strange that he was to be hated and envied by the multitude; and loved by those who knew and understood him best.

In the little town of Pine Tree Quarters, North Carolina, in Edgecomb County; Bishop S.C. Johnson first made his appearance into the world. At the age of three months, he moved from Pine Tree Quarters to Tom's Old Field, N.C. At that time it was snowing, and his mother said that he exclaimed, "Oh, Lord!" as the snow fell into his face. At the age of seven months, he walked.

Always active as a child, he began work in the cotton fields at the age of nine - chopping cotton for the meanly wage of twenty-five cents a day. Later, his boss gave him, because of his faithfulness, the same as the adults, forty cents a day.

The memories of his childhood are not all together pleasant ones nor were they always placid and tranquil. The turbulence of his early life's experiences were the underlying factor in the molding of his so distinctive qualities; his moral, was well as his seemingly eccentric characteristics.

At the age of twelve, he went into public works, at the box mill in Tillery, N.C. Because of his ability to excel he was transferred from the box mill to the planning mill. From the planning mill to mixing room; dragging sawdust across to the boilers and from a wood passer to night fireman at the saw mill.

All the hardships of poverty were his. He was of a very meanly birth and existence. However, as a child he was ambitious. Never would he be content with menial wages; others were content to squalor in the dire poverty that had been their existence from their birth. They were content with half a loaf, but not he.

In the year of 1910, he left Tillery and went to Berkeley, VA. There, he worked on the old dominion docks. After a short sojourn there, he went to work at the Foster Luraber Company. While there, he lodged at 309 Mahones Ave., in the city of Berkeley, Virginia.  Because of his family ties and his devotion to his mother, he returned to Tillery, N.C. His mother and his brother and himself moved to a farm in Halifax County. Here they stayed 2 years and then moved to another farm called the Tilleries Farm and there farmed on shares. Here they stayed 2 years; and in the year of 1915, he went to Emporia, Virginia, hunting work. Finally after a hard struggle, he obtained it at a brick yard. Here he earned $1.00 a night working 12 hours a night. While here he heard of an opening in the E. I. DuPont Powder works in Hopewell, VA. He went from Emporia to Hopewell, VA and obtained work. Here he worked 13 hours a night. He was transferred on hour shifts from 7 to 3,  and from 3 to 11,  and from 11 to 7 in the morning: which is called the swing shift.

To every boy, however, how hard the task of earning an existence through life may be, there are events that are most prominent that he can recall; that leaves a pleasant memory. There were the days, back no the farm, when his boyhood home were flooded with torrential rains; then work was impossible. The horizon was darkened and everyone delighted in the fact that they could have a respite from the drudgery of farming for a short, too short season.

There were also the placid, tranquil days when one could get a gun, and a few shells and hunt until his heart was content. Even if game was scarce, one's heart was pacified just to walk along the flat sage brushes and kick here and there; perchance a rabbit might jump up: and if one did, the yelping of the dogs burned as fever on one's brain. It was wonderful just to walk along and gaze reverently into the blue azure skies and dream reverently of the future. Here it was that his heart was drawn to the Lord God that formed him. As yet, however, he knew little of God of the fact that man should serve Him. That was a fact that was revealed to him much later in his life. Little did he dream of becoming the philanthropist that he is; little did he realize that out of the hardships and sufferings would come the dawning of a new era.

One day, his childhood illusions were shattered forever, seemingly. This event happened one beautiful summer day when work was over and the children were permitted to play until they were appeased. The youthful colloquy turned from life to death. Now "Sherrod", as he was called by his intimates, had never heard of the fact that men had to die and be buried. Suddenly he had to have an affirmation of this fact that he had blundered into. In his imagination he could see himself being buried. He could imagine the cold dark earth secreting him from human vision. Faster and faster he ran. He found his way out of the cotton patch homeward. "Mother, mother," he cried. "Mother, is it true that everyone has to die and be buried?" Cold sweat ran down his brow and he trembled visibly and violently against his mother's knees. His mother soothed his head and pressed him fondly against her breast. She held him thus until his fears had subsided. Gently she explained in her way the difference between life and death. The fact that if a man lived a life acceptable to God he had hope of another life if on the other hand he lived a dissipated life of sin, he was destined to a life of eternal damnation.

His Early Call To Ministry

Print | Sitemap
© 2014 The Church of The Lord Jesus Christ of the Apostolic Faith, of Paulsboro
Login